This post is an introduction to ‘monitoring the fetal heart rate’ in NICE CG190 2014 (care of healthy women & their babies in labour & birth). I am going to assume a basic knowledge of the evidence and terminology. A post about ‘interpreting the fetal heart rate when using a CTG machine’ follows. For a more accessible introduction to the topic of monitoring in labour,  you will find information from NICE here and here (note that it is a more general introduction – for women, whereas this blog is ‘a bit technical’ – it is about sharing  how evidence is reviewed and recommendations are made. )

I am beginning blogging CG190 with monitoring of the fetal heart rate because, for me personally, the 2014 recommendations about CTG use felt very important, and some of the reviews of the research evidence really surprised me.

Also,  NICE has decided to look at some of CTG evidence for both ‘low risk’ and ‘high risk’ populations as part of ‘Intrapartum Care 2 – care of women at higher risk of complications in labour & birth (‘IPC2’). Knowing that some of the CG190 ‘Evidence to Recommendations’ sections may be replaced by the deliberations of the IPC2 guideline development groups, I want to acknowledge the work done on looking at monitoring evidence (as it was in 2014) that the CG190 text represents. (28 May 2016, published 5 June 2016)

Chapter 10 of the Full CG190 guideline, on monitoring the fetal heart rate in labour, begins by comparing  cardiotocography (CTG) and intermittent auscultation (IA). The text extracts I include here are from the Full guideline document.The recommendations are taken from the online version of the guideline.

Those of you familiar with the evidence and the NICE 2007 guideline will know that IA was recommended over CTG in 2007, for women at low risk of complications. CG190 does not change this for healthy women in uncomplicated labour – but the recommendations were updated.

Monitoring the fetal heart rate is a complicated subject. Many people assume that a  continuous listening device (CTG, in this case) must be a better, safer, more useful piece of ‘safety kit’ than a small, hand-held device (a Pinard or a hand-held Doppler ultrasound device – often known as a Sonicaid) that is used at intervals (every 15 minutes, during established labour.) In fact, as with all interventions, it is dangerous to assume what the outcome(s) and impact(s) will be without checking by doing some research.

Before we get to what the systematic review of evidence comparing CTG and IA showed in this case, it is probably useful to pause a moment and take a look at CTG as a method of monitoring the fetal heart rate in labour. It is widely used in other countries without regard to the research evidence, or as a substitute for one-to-one care in labour, and is sometimes poorly understood here.

Three things that are often not understood about CTG are:

Reflecting on this, the guideline development group (GDG) noted that the fetal heart rate can reflect any one of a range of factors:

So the fetal heart rate can be affected by factors other than a shortage of oxygen for the fetus: for example, the behaviour of the fetus, any pain relieving measures or medications that the woman is using, or the mother having a raised temperature or fever. Also, the fetal heart rate is not a direct measure of the oxygenation of fetal blood – it is a ‘surrogate’ measure. This is why further investigations are often needed to check whether a sign causing concern actually does reflect a problem.

The GDG made a research recommendation acknowledging the lack of a research evidence base for CTG: 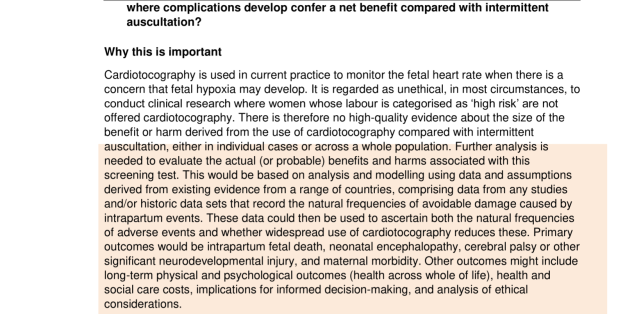 While IA is similarly based on an assumption (without direct research evidence of effectiveness) that listening to the fetal heart rate during labour will improve outcomes, given the availability and assumed efficacy of medical interventions, IA (whether with a Pinard or a Sonicaid) was ‘usual care’ when CTG was introduced. Not checking that the new method really was an improvement was unfortunate, if well-intentioned, and not unusual in the context of medical practice at the time. (For historical background see a James Lind library article here)

Having reviewed the systematic review of research evidence comparing CTG use with IA, the GDG decided on the basis of the evidence to continue to recommend (as the 2007 original guideline did) that continuous CTG not be used in established labour for healthy women. They also noted:

The GDG’s reasoning in making the recommendation that IA (not CTG) should be offered to healthy women  was this (showing here part of a longer section of text):

The GDG felt, based on current clinical practice and the reasoning shown below, that there are occasions when changing from IA to CTG is advisable:

The GDG also made a research recommendation, not shown here (see Full guideline), in the hope of having more clarity about situations where it is advisable to change from one method to the other.

The main monitoring recommendations for straightforward labour and birth are these (taken from the online version; see Full guideline p.388, p.451, p.510 as well – the recommendations are numbered differently there): 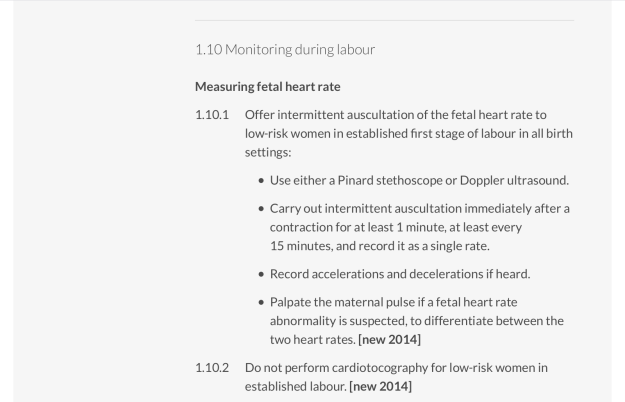 If there are concerns when the woman is first seen by her midwife in labour, or concerns arise later:

There are recommendations for two specific circumstances:

Note especially the second of these: when a necessary check has been performed, and if there is found to be no problem, then the labour is not treated as if a problem had been found. This indicates no loss of vigilance. Rather, careful attention to what is happening, and ongoing care.

Remember that a CTG machine is not a diagnostic tool, and the machine does not provide care.

The recommendations focus on providing care, as well as screening (as will be apparent in the next blog, about fetal heat rate interpretation).

If continuous monitoring is advised -information

So what are the recommendations about giving information to the woman if CTG is advised?

The focus is on the woman receiving care, and factors to be taken into account in interpreting the CTG trace include her report of how she is feeling and of the baby’s movements, as well as a number of significant clinical factors (recommendation 1.10.12).

Of course, as noted in recommendation 1.10.10, some CTG sets restrict the woman’s mobility, and cannot be used in water. Based on the evidence about telemetry sets – including their cost, and the group’s expert knowledge – the GDG recommended:

Recommendation 1.10.9 is the summary recommendation regarding interpreting CTG traces that I will look at in more detail in my next post. Bear in mind always, please that I am not a clinician, and that to understand the evidence, the ‘Evidence to Recommendations’ process, and the recommendations fully, you will need to read chapter 10 of the Full guideline.

See note about numbering of recommendations and page numbers at the end of my second blog on this topic here.

You can find the recommendations on the NICE website:

And the evidence, the GDG’s interpretation of the evidence (details of the reasoning process), and the recommendations, in that order, Chapter 10 of the full guideline:

Tools and resources are here (including the tables summarising the CTG recommendations).

You may find the pathways useful too.